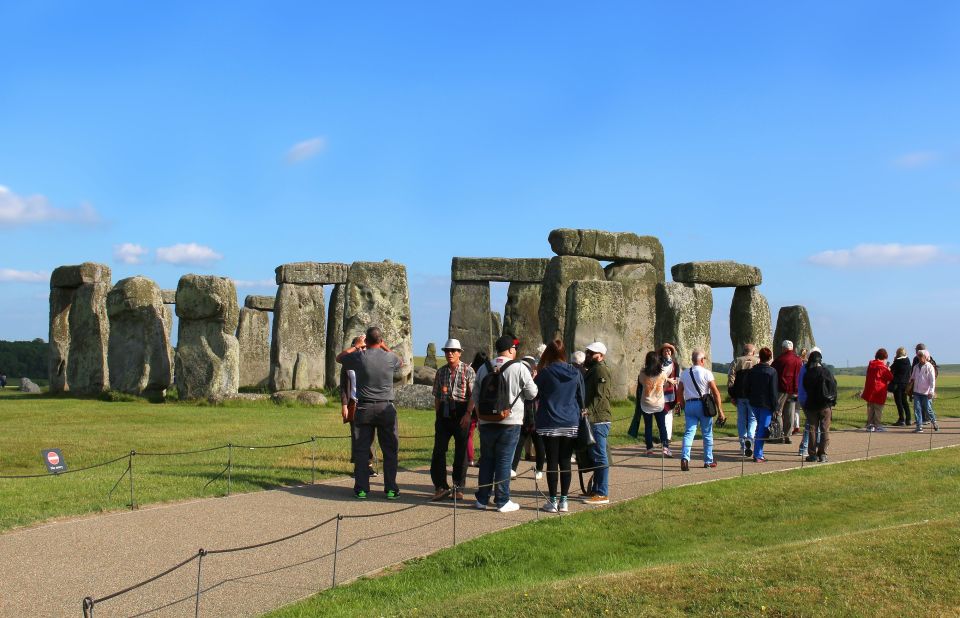 Best Places To Visit Near Stonehenge 2022

Stonehenge is one of the most popular tourist destinations in the world, and for a good reason! This prehistoric wonder is a glimpse into an older world, one with architectural sophistication that is rarely seen today.

If you’re planning a trip to Europe, Stonehenge should be at the top of your bucket list! Moreover, there are numerous beautiful places to visit near Stonehenge. This guide is all about pointing you in the right direction so you can make the most of your monumental visit.

What Makes Stonehenge an Important Neolithic Landmark You Need to Visit on Your London Trip?

Touted as a UNESCO World Heritage Site since 1986, Stonehenge is a prehistoric monument located in Wiltshire, England. It is composed of a ring of standing stones, each around 13 feet (4 meters) high, with a larger stone called the “sarsen” at the center.

The stones are set within earthworks that form a horseshoe-shaped ditch and bank surrounding the monument. Archaeologists believe that Stonehenge was constructed between 3000 and 2000 BC by Neolithic people.

The purpose of Stonehenge is unknown, but it has been speculated that it was used as a temple, an astronomical observatory, or a burial ground. Today, Stonehenge is one of England’s most popular tourist attractions and attracts around one million visitors each year. Stonehenge Tickets & Tour can help make your dream of exploring Stonehenge a reality, and with our travel guides, you can find the best spots to snag great deals on the latest tours.

Exploring the Ancient Mysteries of Stonehenge: What is its Origin Story?

Construction for Stonehenge is said to have begun around 3100 BC, which is older than the pyramids in Egypt. The stone circle was built by a culture with no writing system, so its origin and purpose are still unknown.

The largest stones at Stonehenge weigh 25 tonnes, leading to speculation about how the stone age society could have transported them. Some believe that aliens or a race of giants helped the Neolithic people, while others say that Noah’s flood wiped them out.

Theories about how Stonehenge was built range from the practical to the outlandish. Some scientists believe that a bridge made of tree logs laid side by side was used as a horizontal ramp. Others believe that the ground was greased with animal fat to make it easier to push with minimal resistance.

It’s still unknown exactly why Stonehenge was built or what it was used for, but archaeologists believe that it served as an important religious site for thousands of years. The stones were likely brought from miles away by hand, so it must have taken a huge effort to construct such an impressive monument.

Some clues give people an insight into its purpose, such as the stone’s perfect alignment with the sun’s rays during summer and winter solstice, the longest and shortest days of the year.

With that in mind, it could mean that Stonehenge played a pivotal role in ceremonies, with possible “healing” capabilities enhanced during the changing seasons. On the other hand, it could also have been an ancient observatory where scientists of their time monitored and marveled at celestial movements.

Buy a Stonehenge skip-the-line ticket or book a guided tour and uncover the history behind this monumental landmark!

What to Expect at Stonehenge: What Else Do You Do?

Stonehenge is a unique, open-air archaeological site that has been around for over 4,500 years. There are many things to see and do at Stonehenge, so it’s worth planning your visit in advance.

The site is open every day of the year from 9 am to 6 pm (4 pm from November to February), and admission costs £14.50 for adults or £13.50 for students and seniors. There’s plenty to see at Stonehenge, including the stones themselves as well as a visitor center with exhibits on how Stonehenge was built and used. You can also walk around the surrounding landscape and enjoy the beauty of nature, which offers breathtaking, panoramic views of Salisbury Plain.

The first thing you will do when you visit Stonehenge is to go to the visitor’s center, which is located 2.1 kilometers (1.5 miles) from the Stone Circle, at Airman’s Corner. The Stonehenge visitor’s center has an exhibition area with informational displays, a cafe, a gift shop, and an outdoor gallery with replicas of Neolithic houses.

After exploring the expansive plains of Stonehenge, you can hang by the cafe and end the tour on a sweet note with its vast array of decadent, homemade rock cakes, or recharge your energy with a hearty bite of their delicious sandwiches.

Moreover, there are multiple amazing places to visit near Stonehenge, so make sure not to miss them on your trip.

Budgeting for Stonehenge: How Much Does It Cost?

If you want to visit Stonehenge, you’ll need to pay an entrance fee of £19.00. You can buy your ticket at the visitor’s center, or you can get it online in advance. If you get it online, you’ll get a mobile voucher with instant confirmation, which means you won’t have to wait in line.

If you’re running tight with your money, don’t worry! Stonehenge Tickets & Tours knows hidden gems where you can get ticket tours that meet all kinds of budgets.

Other Beautiful Attractions to Visit Near Stonehenge

If you’re looking for places to visit near Stonehenge, here are some top tourist attractions you may love:

The City of Bath is a UNESCO World Heritage Site located in Somerset, England. The city is famed for its Georgian architecture, as well as its Roman-era baths. Other popular tourist destinations in the area include the limestone hills of the Cotswolds and the charming medieval town of Wells.

Bath is home to Britain’s only natural mineral hot spring, which still supplies most of the city’s baths with water, making it a place that feels like a river that flows through time—one where the past, present, and future all move in one stream.

You can book a Stonehenge & Bath tour, and you’ll have a professional tour guide to immerse you in the experience and expand your knowledge as you go.

Take a leisurely trip on a luxury coach tour of Stonehenge and Georgian Bath. On this tour you'll have plenty of time to explore the ancient monument Stonehenge as well as the city of Bath.

The Grandeur Of Windsor Castle

Windsor Castle is one of the most iconic and beautiful castles in the world, and it’s one of the best places to visit near Stonehenge. It is located in Windsor, England, and has been used as a royal residence for centuries. The castle is massive and imposing, and its architecture is stunning. It contains a variety of different rooms and areas to explore, including the State Apartments, St. George’s Chapel, and Queen Mary’s Dolls’ House.

The castle consists of several different buildings, including the Upper Ward, Middle Ward, Lower Ward, and Round Tower. There are also several gardens and parks located on the property. The grounds are open to tourists year-round, while the buildings are only open to visitors during certain hours, depending on the time of year.

There are also beautiful gardens to wander around in, complete with fountains and sculptures. Windsor Castle is definitely a must-see attraction for anyone visiting England!

The Beauty Of The Cotswolds

The Cotswolds are an area of stunning natural beauty in the southwest of England. The region is known for its rolling hills, lush green pastures, and picturesque villages. The area is a popular tourist destination and attracts visitors from all over the world.

There are plenty of things to do in the Cotswolds, including hiking, biking, fishing, and horse riding. There are also plenty of charming villages to explore, each with its unique character and history. Some of the most popular villages in the Cotswolds include Bibury, Burford, and Stow-on-the-Wold.

Old Sarum is an ancient site located in Wiltshire, England. It is believed to be the location of the original settlement of Salisbury. The site has been used for various purposes over the years, including as a fortress, a palace, and a cathedral. Today, it is open to visitors and offers exciting insights into English history.

The Cathedral City Of Salisbury

One of the most bedazzling places to visit near Stonehenge is the Salisbury Cathedral. It’s a beautiful and iconic cathedral located in the city of Salisbury, England, towering over the village with its awe-inspiring, Gothic design. The tall expanse of walls and intricate details line the tower, giving it an imposing impression that naturally calls for any passerby’s attention.

The cathedral was founded in 1220 and is home to historical features that withstood the test of time, including the world’s oldest working clock and the tallest spire in Britain. Visitors can enjoy tours of the cathedral, as well as its grounds which include a lovely garden.

The city of Salisbury itself is also well worth a visit, with its charming medieval streets and lovely parks. There are plenty of restaurants and pubs to enjoy in Salisbury, as well as exciting shops for visitors to explore.

Avebury is another prehistoric stone circle located in Wiltshire, England. It is said to be even older than Stonehenge and is made up of three stone circles and a number of standing stones. The Avebury Ring is the largest megalithic construction in Europe, and it’s believed that the site was used for religious ceremonies and rituals.

While Stonehenge captures the genius engineering of its time, Avebury takes on a more free-spirited approach, one that calls on your inner wildness to come out and explore nature at its finest. Not to mention, visiting Avebury is free, so it’s also worth a visit along the way.

The Bottom Line: What to Know When Exploring One of the World’s Oldest Wonders at the Stonehenge

Stonehenge is a mysterious and ancient wonder that has puzzled historians and archaeologists for centuries. Located in England, this massive structure consists of huge stones that have been arranged in a specific pattern.

Though the true purpose of Stonehenge is still unknown, there are many theories about its origins and function. Despite the lack of clear answers, Stonehenge remains a fascinating destination that is definitely worth exploring.

If you want to take in more of what the area has to offer, you can also take a look at other places to visit near Stonehenge. They’ll surely complete your experience.

Plan Your Stonehenge Visit Ahead

See our amazing offer of Stonehenge tours and day trips to its surrounding cities, villages, and attractions!